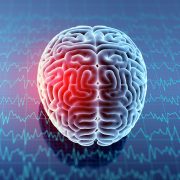 What happens to the brain when a concussion happens?

Inside your skull you have cerebrospinal fluid and of course your brain. A violent impact causes your brain to vibrate and sometimes even bump against the skull bone. If the force is too much, you end up with a concussion. Ironically, the trauma that occurs when the brain hits the skull is often not evident because the damage is on the inside.  It is known as the “Silent Injury” according to Dr. Lovell from the University of Pittsburgh’s medical center which researches concussions.

Once common mistake is assuming that because you didn’t get “knocked out”  the hit to your head was minimal. If you experience vomiting, dilated pupils, loss of smell or taste you should visit with a neurologist immediately. Additional negative symptoms after a head impact are headaches, dizziness or memory loss lasting more than five days or delayed memory of easy questions (i.e. what did you eat for breakfast yesterday morning?).

Four Stages of a Concussion

Impact to the head – The most common causes of concussions are falls, car accidents, impact sports and explosions. The trauma causes force to the head in two directions: linear (forwards and backwards) or rotational (side to side). These forces literally cause your brain to “slosh” within the cerebrospinal fluid and bump up against the skull.

Inflammation – Trauma to the brain can damage neurons, the cells that govern the flow of chemical messengers known as neurotransmitters. In the worst case scenario, those damaged neurons lose control of the neurotransmitters, allowing them to accelerate up to five (5x) their normal speed. The resulting chemical acceleration can cause memory loss, blurred vision, dizziness, headache and nausea.

Hibernation – Your brain’s cortex detects the neurotransmitter imbalance and tries to fix the neurons by calling for a surge of healing glucose. At the same time, calcium neurotransmitters start constricting the blood vessels, delaying glucose from reaching the neurons. Your brain function slows until blood flow returns to normal.

Recovery – Healing the neurons within your brain can take several weeks.. However, if you sustain another concussion during this period, you could suffer permanent damage and a lifetime of headaches and other adverse side effects. Though it is hard for competitive athletes,  staying away from the potential of re-hitting your head, rest & proper nutrition will facilitate the recovery process.

Note: if you experience headaches after hitting your head, DO NOT consume aspirin or ibuprofen (this may increase your risk of brain bleeding); instead use acetaminophen.

This site uses cookies. By continuing to browse the site, you are agreeing to our use of cookies.

We may request cookies to be set on your device. We use cookies to let us know when you visit our websites, how you interact with us, to enrich your user experience, and to customize your relationship with our website.

Click on the different category headings to find out more. You can also change some of your preferences. Note that blocking some types of cookies may impact your experience on our websites and the services we are able to offer.

These cookies are strictly necessary to provide you with services available through our website and to use some of its features.

Because these cookies are strictly necessary to deliver the website, refuseing them will have impact how our site functions. You always can block or delete cookies by changing your browser settings and force blocking all cookies on this website. But this will always prompt you to accept/refuse cookies when revisiting our site.

We fully respect if you want to refuse cookies but to avoid asking you again and again kindly allow us to store a cookie for that. You are free to opt out any time or opt in for other cookies to get a better experience. If you refuse cookies we will remove all set cookies in our domain.

We provide you with a list of stored cookies on your computer in our domain so you can check what we stored. Due to security reasons we are not able to show or modify cookies from other domains. You can check these in your browser security settings.

These cookies collect information that is used either in aggregate form to help us understand how our website is being used or how effective our marketing campaigns are, or to help us customize our website and application for you in order to enhance your experience.

If you do not want that we track your visit to our site you can disable tracking in your browser here:

We also use different external services like Google Webfonts, Google Maps, and external Video providers. Since these providers may collect personal data like your IP address we allow you to block them here. Please be aware that this might heavily reduce the functionality and appearance of our site. Changes will take effect once you reload the page.

The following cookies are also needed - You can choose if you want to allow them: